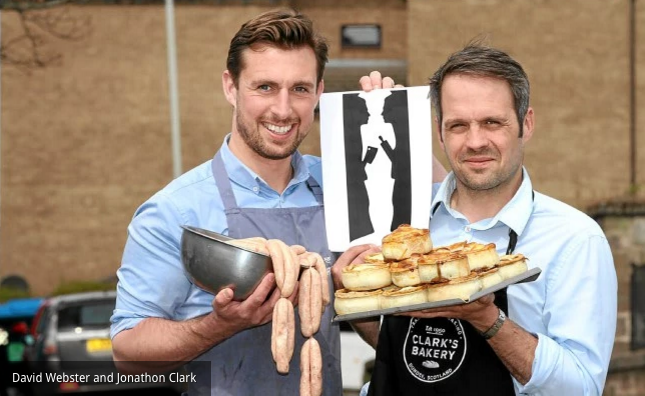 Photo courtesy of The Evening Telegraph

THE BUTCHER David Webster
is the fourth generation of Webster’s Butcher.

THE BAKER Jonathon Clark
is the third generation owner of Clarks Bakery.

Clarks Bakery is a major Dundee success story and employer and is an indigenous, Dundee born and bred company, that employs 100 local people. The Butcher The Baker uses this success as both the foundation and catalyst for its formation. We pride ourselves on our Dundee heritage that is now in the third generation of family ownership and management.

Paul Higgins is our Butchery Manager. 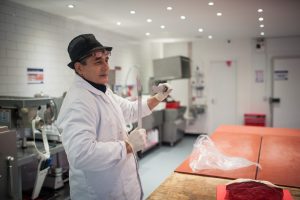 Our no compromise approach to The Butcher The Baker concept was ensuring that we sourced the best and we certainly did that in attracting Paul, from the famous Scottish tourist attraction and quality retailer, The House of Bruar, where he was manager of their butchery. Whilst at The House of Bruar he won many awards for his products using his personally developed recipes and skills. As you can imagine, achieving such a prestigious position at The House of Bruar is an accolade in itself. He is a Craftsman in the true sense of the word.

We are proud to say that Paul’s main reason for joining us at The Butcher The Baker was his recognition of THE PASSION we have for delivering this innovative and contemporary new business and how it so much aligned with his own PASSION for culinary excellence and service.

Paul undertook a full, very long and comprehensive Master Butcher’s apprenticeship with Dewhurst, The Master Butchers, firstly as a retail butcher. His talent did not go unrecognised very long by his employers and he was earmarked for greater things and his skills were developed by working in all aspects of meat production, from game suppliers and farms and feed makers. He has been a butcher for nearly 35 years and has been involved in the trade since has was a lad, aged twelve, in Blackpool.

Due to his PASSION and creativity in food development he gravitated to Dewhurst’s kitchen as a chef and the product development team. He is a very talented and multi-faceted food developer, producer and supplier. 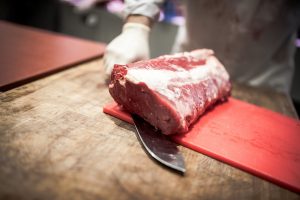 During his long, dedicated and illustrious career, he has won various awards for his products, such as Diamond awards for his pork sausages and many Gold awards for his bacon. Recently he won best Steak Pie in Great Briton for his steak pie and steak and ale pie and was overall winner with his steak and kidney pie, which came top in the UK again. Paul tells us that he has never actively sought the lime light with his awards but the recommendation from his customers and peers is his main source of pride and personal “raison d’etre”.

To say that he has the full insight of meat production from field to plate and everything before and in between, is a bit of an understatement.

Being a true gourmand himself ensures that he produces nothing that doesn’t pass his own discerning palate and exacting standards.

Paul’s skills and reputation have also seen him work as a college lecturer allowing him to pass on his knowledge to the next generation of Craftsmen.

We use cookies to ensure that we give you the best experience on our website. If you continue to use this site we will assume that you are happy with it.OkRead more