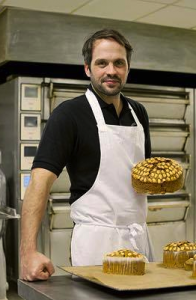 Managing Director, Jonathon Clark, was born in Dundee in 1980 and is the third generation of the Clark family that has had a major influence on the bakery and retailing sector in Dundee.

From a very early age, whether it be delivering newspapers or rolls, he had embraced his father’s and grandfather’s work ethic and entrepreneurial vision and understood that hard work and creativity was the key to success. He has never lost sight of this and along with passion, it is his personal mantra.

Having left school in 1996, he immediately identified that formal education wasn’t for him and realised that starting from the bottom and learning his father’s and grandfathers’ skills was where his practical education would be developed.

He cut his teeth in business by owning and operating several small businesses, from gardening & oven cleaning services, to events organisation and valeting cars. From the beginning, it became obvious that business was in his blood and he shared the entrepreneurial genes of his parentage.

In 2000, after a period of travelling in Australia, then chasing his love of the mountains and skiing, France, Canada & America. Once he had lived the dream, he re-joined reality and joined the family business, Clarks Bakery Ltd.  His key role and focus has always been in business development, whilst keeping a close eye on ensuring the highest quality of management of the company’s production and production processes.

Keen to take the business in to the next millennium, he was instrumental in taking the business in new directions with the introduction of the deli take-away and the development of the wholesale business.

As a modest man, he is slow to take credit for part of the phenomenal success that has now become Clarks 24-hour bakery, but this success is testimony to his vision, passion, creativity and the building of the right team around him and the support of his father, Alan.

Jonathon’s main role in the business is new product development, marketing and human resources and he is extremely passionate about serving quality local produce and making the production of the business a visual as possible so that the customer can see the whole handmade traditional process in action. He is quick to point out that a major factor of the success of the business has been down to the loyalty and hard work of their staff and they are proud of the fact that Clarks and The Butcher the Baker, has evolved into a major Dundee employer.

When Jonathon and David became friends as twelve year olds, little did they know that 25 years later, they would be working harmoniously and with the same values that have created The Butcher the Baker. Their love of skiing, good food and friendship has been a major catalyst in the success and direction of this new venture.

Conceiving The Butcher the Baker has integrated the Clark family’s and company’s core values and traditional elements of production, with customers being able to visually see all the stages of production whilst also showing the provenance of their meats, suppliers and products.

Jonathan is married to Chloe and along with their daughter Poppy, remain his bolt hole for relaxation and happiness.

Alfie, his chocolate Labrador dog, has been like a child in a sweetie shop since the opening of the butchery business………………..for obvious reasons.

We use cookies to ensure that we give you the best experience on our website. If you continue to use this site we will assume that you are happy with it.OkRead more